Are the Hyperloop and the Self-Driving Car the Future of Transportation ? 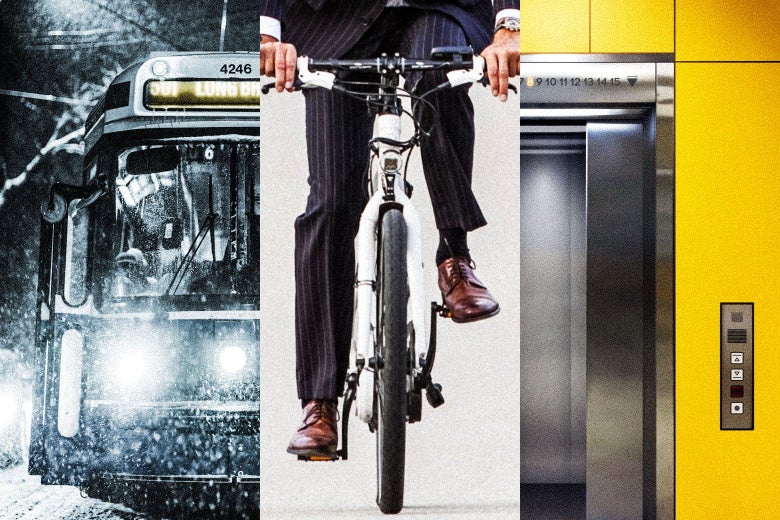 This essay-article is adapted from The Future of Transportation , published by Metropolis Books. It debunks the exciting futuristic modes of transportation that have been hyer hyped. Good tuff here.

The bus, the bike, and the elevator are.

Thinking about the future of transportation from the United States can sometimes feel like thinking about swimwear in Svalbard: There is little to see here (and hasn’t been in some time). China has laid down the world’s largest high-speed rail network in just two decades, quashing its high-polluting domestic air business. Congestion pricing has been rolled out in London and Singapore, making the downtowns more pleasant and walkable. Cycling has become a crucial transportation mode in places as varied as Shenzhen and Strasbourg. In the U.S., by contrast, travel by plane, train, bus, and foot is undoubtedly less pleasant than it was 50 years ago.

Driving is, more than ever, the American way of life. It’s there, not surprisingly, that U.S. transportation has shown its greatest technological advances: Elon Musk’s electric car company Tesla, Alphabet’s self-driving project Waymo, the instant-hail taxi revolution of Uber and Lyft. Personal transport is looking up, with Alphabet, Bell Helicopter, Uber, and Boeing all chasing after the promise of autonomous flying taxis.

This is not where the future of transportation lies.

Nor does it lie in concepts like the Hyperloop, Musk’s vision of long-distance vacuum-tube travel at the speed of sound, which has birthed a cottage industry of startups aiming to perfect the technology first. Such ideas are dazzling, but they are either very far from changing the quotidian global experience of mobility—or they serve to entrench the patterns of movement, and the frankly lousy design of cities, that we have today.

In the former category—what I might call the Hyperloop Group, for their pattern of bold promises and missed deadlines—is self-driving technology. It is the holy grail of transportation advances, the kind of change that would firmly abolish the cityscape our grandparents knew. Early stages of autonomous technology are already saving lives, and the safety advances of a fully automated road system might be the greatest U.S. public health achievement of the century.

But the final rungs of the ladder are proving very, very difficult to ascend. In November 2017, Waymo CEO John Krafcik said the subsidiary would be operating commercial taxis within months without a supervising driver. “Fully self-driving cars are here.” A year later, Waymo’s cars hit the road in Phoenix—timidly, and with supervisors poised to take control. Around that time, Krafcik revised his prediction and stated that it would be decades before autonomous cars were widespread. This summer, about three in 10 Waymo rides were receiving negative feedback from riders.

Former Uber CEO Travis Kalanick once said autonomous vehicles were an “existential” need to his company, which burns $1 billion a quarter on subsidies for drivers and riders, and the company believed as recently as 2016 that it would have 75,000 autonomous vehicles on the road by this year. But after an autonomous Uber hit and killed a woman on a Tempe street last March, Uber has scaled back its ambitions—and represented autonomous vehicles as an afterthought in its initial public offering filings earlier this year. “[The crash] caused everyone to understand that there’s not only a long way to go technologically but from a social point of view there’s liability and brand risk,” Gill Pratt, the head of Toyota Research Institute, told the Wall Street Journal in early 2019. Autonomous vehicles are here, but mostly limited for the foreseeable future to closed-course use, as shuttles or other fixed-route transportation. In September, citing slower-than-expected progress, Morgan Stanley cut Waymo’s valuation by 40 percent.

In the latter category—those technologies that do little to change the status quo—are Uber and Lyft. Those companies (like every startup) set out to change the world and wound up creating a whole lot of traffic, before investing heavily in technology that even your grandparents would have found antiquated: bicycles and scooters.

There’s a lesson in that. Getting people around in new, different ways—as happened in Amsterdam between 1970 and 2000, between Beijing and Shanghai in the past decade, and in Dar es Salaam right now—relies mostly on technologies that we have had for a while. Why should we want to change the status quo? Most urgently, because transportation from motor vehicles is the largest source of greenhouse gas emissions in the United States. We spend, on average, nearly two full days a year in rush-hour traffic (about five days in Los Angeles). We pay dearly for the privilege, spending $740 a month per car according to AAA. Last year, 36,560 Americans died in car crashes, not including 6,283 pedestrians killed by cars. Countless more are sickened by exhaust. Nearly half of American kids walked or biked to school in 1950; today that figure is 13 percent.

The tools we need to change transportation are right there in front of us. It’s not the lack of bleeding-edge technology that has stopped us from building cities where a person can live without owning a two-ton, $25,000 vehicle, or from designing a high-speed rail network to sap carbon-spewing domestic air routes like the one between New York and Chicago (the nation’s first and third cities are no further than Beijing and Shanghai, which are now joined by a 4.5-hour train). It’s not for want of “innovation” that we aren’t turning parking into parks, or traffic-clogged arterial roads like New York’s smoggy crosstown arteries into multimodal streets. It’s not the deferred promise of automation that stops us from charging people for the full, ice cap–melting cost of driving. The future of transportation is not about inventions. It’s about choices.

The transportation technologies that have changed the world, annihilating time and space, have only been as good as the developments they enable outside themselves. Mobility is not a good in and of itself, and few people ride for fun. The automobile was in many ways not a mobility improvement over existing technology for most city dwellers in 1900. (The elevated train was a much faster way to get from one end of town to the other.) Nor was the elevator a substantial or cost-effective improvement for residents of the city’s low-rise buildings in 1870. The beauty and the value of transportation is in the new ways of living it creates, the patterns and rhythms and efficiencies of life we allow it to make possible.

In this sense, an advance like vehicle electrification—while exciting, if it can come around fast enough to spare us from climate catastrophe—hardly constitutes a new way of getting around. Past breakthroughs (civilian helicopters, the Concorde) have offered thrilling ways to go from A to B that were impossible to scale and left little mark on the world.

Many older transportation technologies, however, have yet to be used to their full potential. Most American communities, for example, gave up on the elevator, the bus, and the bicycle in favor of auto-dependent sprawl that has left us condemned to drive until (and after) our eyes fail—and turned transportation into the country’s largest source of greenhouse gas emissions.

The elevator is perhaps the foremost example of a relatively ancient transportation technology that could allow people to live and work in closer proximity, reducing the length of commutes and fostering commercial and social vitality. Unfortunately, in most American communities the elevator has been functionally outlawed because zoning requirements will permit no building taller than a small tree.

The bus is another overlooked piece of technology that could do far more. In most American cities, buses are hard to depend on because they run infrequently, slowly, and often on routes that are holdovers from streetcar systems abandoned decades ago. Give a bus its own lane, its own route, its own authority over signals, and it can permit car-free land use to flourish alongside.

And no technology holds as much promise as the humble bicycle—especially when we include its newfangled, electrified cousins—to solve the geometry problem that is getting people short distances around a big city. Even in the United States, where everything is fairly far apart by global standards, 48 percent of automobile trips in the biggest U.S. cities travel less than 3 miles—a distance that, with the right infrastructure, could be easily covered by a smaller vehicle.

New movements are emerging, pushed by the recognition of the inefficiencies, inequities, and externalities of our car-centric cities, and pulled by a host of technical advances in satellites, cameras, batteries, and computing. Arguably, the smartphone is the most fundamental transportation technology of the 21st century. Our constant companion has changed the way we experience travel, connecting commuters to new information, to nearby vehicles, and, perhaps most importantly, to anyone going their way. Unfortunately, the progress it makes possible in transit use (so-called micromobility) and multimodal journeys is often impeded by car-centric design.

The urbanized population of the globe has grown from 750 million in 1950 to 4.2 billion today. The United Nations predicts the next 30 years could see another 2.5 billion people join them. That’s a lot of people inheriting the fundamentally broken urban model that the United States let loose on the world, a system predicated on personal car ownership that not only required enormous public expenditure and unleashed uncountable damage to existing neighborhoods and the environment, but also turned mobility into a predatory financial product that is the fastest-growing source of U.S. household debt.

Even here, in a nation of unprecedented personal wealth and plentiful land, the car-centric system has pushed up against the limitations of space, proving expensive to maintain and impossible to scale. In the fast-growing cities of the developing world, the situation is more extreme, as commutes consume a greater and greater portion of the world’s energy, time, and cash. It has been a century since Le Corbusier’s secretary remarked to him, “I’ve spent the best years of my life on the train,” launching the architect into such utopian land use ruminations as the Plan Voisin. Residents of the megacities of Jakarta, Lagos, and New Delhi would consider themselves lucky to have her commute.

A better world is possible, and it doesn’t start in the U.S. patent office or with what is on display at the Detroit Auto Show, the Paris Air Show, or the Consumer Electronics Show in Las Vegas. It won’t require supersonic travel tubes or cars that drive themselves. The ideas are here if we want them. We’ll have to rethink the trip, but even more than that, we’ll have to rethink the places we’re trying to connect.