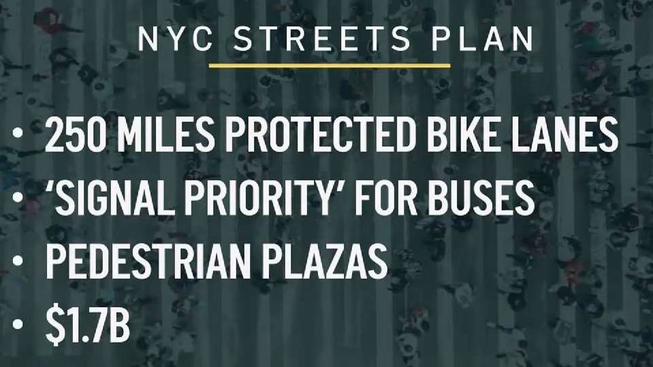 Hopefully, this ambitious New York City Master Plan to add 250 miles of protected bike lanes and 150 miles of bus lanes, will be a landmark in influencing other so-far recalcitrant US cities.

In 2019, at least 25 cyclists have died on city streets and advocates say the protected bike lanes are much needed

A red light in New York City could soon turn green just as a bus approaches, and cyclists could have triple the protected bike lanes they have today as the City Council approved a bill Wednesday that will “revolutionize” the Big Apple streets.

City Council Speaker Corey Johnson says he drew up the Streets Master Plan after hearing from dozens of grieving relatives of those who were killed or injured on New York City streets.

“We need to do everything we can to encourage sustainable modes of transportation, especially with the realities of climate change growing more dire every day. This plan will make New York City a much more livable and enjoyable place to call home,” the likely 2021 mayoral hopeful said on Tuesday.

More Proposals to Ban Cars on Other Manhattan Streets

One community board is set to hear a proposal that would close West 49th and 50th Streets between Fifth and Sixth Avenues year-round, as opposed to only during the holidays. Other streets with the proposed idea include 34th and 42nd streets. NBC New York’s Andrew Siff reports.

The master plan was approved by a vote of 36-10 on Wednesday, with two abstentions.

Supporters of the legislation say the changes will make the streets safer for all New Yorkers.

Harold and Debbie Kahn’s son Seth was killed in 2009 after being hit by a bus driver on West 53rd Street. They joined Johnson on Tuesday to voice their support for the bill.

“Ten surreal agonizing years – we will never get to know what he would have accomplished with his life had he been given a chance to live,” Harold Kahn said.

In 2019, at least 25 cyclists have died on city streets and advocates say the protected bike lanes are much needed.

On the other hand, drivers worry that the crackdown on vehicles has gone too far. They fear that more bike lanes and pedestrian plazas will add to the traffic jam.

“As a driver you can’t get anywhere with all these bike lanes – it’s such a disruption. It’s a problem,” Qumar Smalley, a truck driver, tells News 4.

The changes already made to city streets include banning cars from the busway on 14th Street. The rule has been in effect since the beginning of the month and has been getting very positive reviews from commuters.