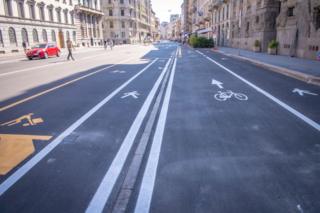 There seems be be broad consensus that urban mobility will change post Coronavirus lockdowns, favouring cycling & walking. For city dwellers, these modes can work fairly quickly.

For suburban commuters some form of dual mode transit (such as bike-on-train) are unavoidable to make this change. Re-configuring urban infrastructure will be inevitable to some degree to maintain an acceptable level of commuter comfort and fluidity.

The UK government is urging the public to walk and cycle to work instead of using public transport or driving.

It comes as people across the UK have told BBC News they are finding it impossible to stay safe outside because our cities were not built for social distancing.

How we will travel while maintaining social distancing is one of the biggest challenges the government faces as it seeks to start to lift the lockdown.

It has led communities, UK transport groups and public health experts to call for radical changes – some already happening globally – such as wider pavements, traffic restrictions and cycle networks.

Such changes would prevent further waves of infections, improve air quality and public health, and help countries achieve their climate goals, they say.

The decline in road use during the lockdown has seen dramatic falls in air pollution – an unforeseen benefit of the pandemic – as well as quieter roads for cycling.

But social distancing has highlighted the close proximity in which we all live, particularly in urban areas.

In Manchester, Deborah Todd has given up on pavements and now walks in the roads with her children; Carrie-Ann Lightley had an accident because pedestrians did not make space for her wheelchair on the pavement in Cumbria; Julie Taylor has to queue to walk through the narrow alleyway outside her home in Wiltshire. And in London, Anne Bookless has stopped going outside altogether because there is no room for her wheelchair.

Cycling has increased by 22% in places such as Greater Manchester, including those key workers commuting by bike where public transport is closed.

When public transport does reopen, capacity will be severely restricted.

In London, the Tube will be able to handle less than 15% of its pre-pandemic rush hour peak: 50,000 passengers every 15 minutes, compared with 325,000 before, according to leaked documents seen by the BBC.

And if more people travel by car, instead of public transport, road space – already at a premium – will be under even greater pressure.

“The crisis has exposed how little space is allocated to people – it’s exposed that everyone wants safe streets,” Chris Boardman, Cycling Commissioner for Manchester and former Olympic cyclist, says.

The UK is being urged to follow the lead of cities like Paris, Berlin and New York City and install temporary measures to create space for social distancing.

“If we enable people to travel differently, we will protect them now during the crisis, and afterwards, when the public health benefits of more people exercising and breathing in cleaner air kick in. That’s how you protect the NHS,” says Mr Boardman.

But banning cars ignores the needs of many road users, says Duncan Buchanan, policy director at the Road Haulage Association (RHA): “Selective bans will have detrimental impacts on all other roads, add to congestion and journey times as well as increase pollution and CO2 emissions,” he argues.

Scientists warn we will need to practise social distancing for at least the next 12-18 months. Public transport will be severely reduced, meaning commuters will need to find other ways to travel.

There are signs people will turn to their cars in greater numbers than pre-lockdown: 56% of drivers currently without a car plan to buy one post-lockdown, according to car sales company AutoTrader.

In Wuhan, China, private car usage nearly doubled when lockdown ended, rising from 34% before the outbreak to 66% after lockdown.

“There is an avalanche of private car usage coming if we don’t do something about it,” says Leo Murray from climate action charity Possible, which campaigns for green transport.

In the UK’s most polluted urban areas, where two studies suggest the air quality is putting people at higher risk of dying from Covid-19, there is a heightened sense of urgency.

People in cities such as London, Birmingham, and Glasgow are already struggling with respiratory disease and heart attacks linked to air pollution. If car use soars, it will be catastrophic for public health and well-being, Mr Murray suggests, as well as for the climate change goals that require a 50% decline in private car use in the UK.

“There is a real incentive to keep our respiratory health as good as possible. Walking and cycling is the way to keep London moving in a safe and socially distanced way,” says Caroline Russell, London Assembly and Islington councillor for the Green Party.

Just 9% of people want a total return to pre-lockdown life, according to a YouGov survey.

Most journeys in the UK are short – 68% are under five miles – meaning that most people could complete them easily by bike if they felt confident and safe. Habit change is notoriously difficult, according to psychologists, but the crisis has transformed behaviours overnight.

“We’ve got this really precious moment to change how we live and we can’t let it slip between our fingers. Let this tragedy re-define, in a positive way, what living in cities is about,” says Will Butler-Adams, the CEO of UK bike manufacturer Brompton.

British cities are lagging behind their global counterparts in making effective changes.

So far, the government has made it easier for councils to close streets to cars, and London has announced its Streetspace Plan to encourage millions more to cycle and walk.

But councillors and planners say more is needed.

“Local councils are overwhelmed with emergency work and lack funding – the government itself needs to lead,” says Adam Tranter, Cycling Mayor for the city of Coventry.

In London, a group of women calling themselves the Tactical Urbanistas took matters into their own hands. Last week they widened the pavement outside a busy high street supermarket, using painted circles on the road surface and makeshift barriers of tyres filled with soil and flowers.

Residents in Tower Hamlets welcomed the change and the barriers were applauded on social media, the group say. However, the local council objected and removed the tyres, citing safety reasons.

“London’s streets are not safe for social distancing and a disproportionate amount of space is given to cars at the expense of other road users. This is a public health risk and needs to be treated urgently,” Tactical Urbanistas told BBC News.

Plans for building cycle networks already exist – government and local authorities just need to enact them, say numerous experts including Brian Deegan, a street engineer who helped design the London and Manchester cycle networks. Light segregation of roads for cycle paths and widening pavements would be cheap and quick, he adds.

“It demands an emergency response. If residents don’t like the temporary measures, councils can reverse them when the crisis is over. But history shows people prefer the quieter and cleaner streets,” he suggests.

Community groups that have long called for greener, sustainable cities hope the pandemic could bring that change.

“So much has been taken away from us, and now people are focussing on the smaller things,” says Paul Riley, from Transition Liverpool.

“We’ve learnt that it is possible to implement change, if we want it.”