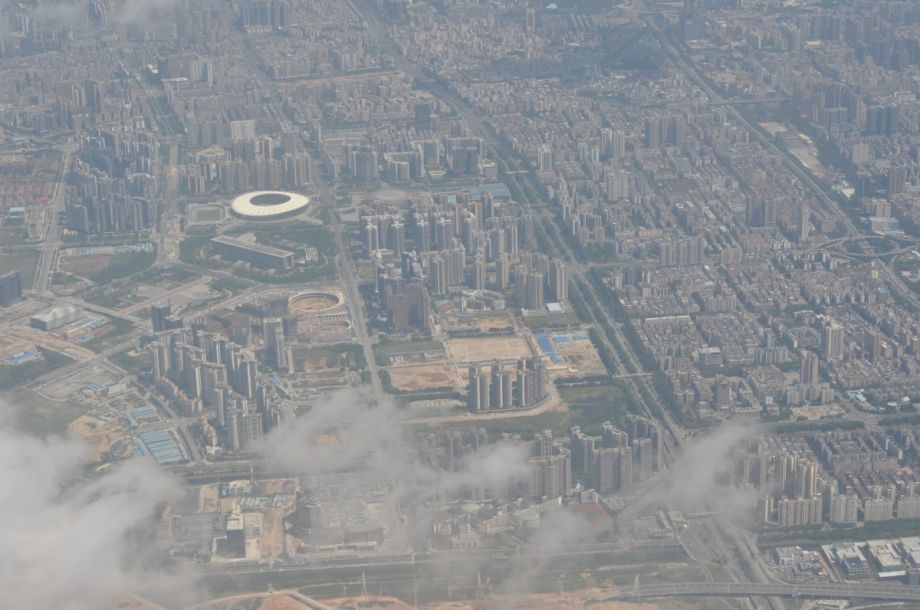 ↑      The Pearl River Delta (made up of the cities of Shenzhen, Guangzhou, Foshan, Dongguan and others) is the world’s largest urban area, with a population greater than Australia, Argentina or Canada. (Photo by Azchael / CC BY 2.0)

While Rome may not have been built in a day, Shenzhen pretty much was. In the 1970s, China’s start-up capital was a fishing village. Today, it’s a megacity with over 12 million people. Groundbreaking new mapping research released this week at World Urban Forum 10 concludes that there are around 10,000 cities worldwide — and as many followed Shenzhen’s trajectory as they did Rome’s.

That startling fact is thanks to a four-year effort from the European Commission and the Organization for Economic Cooperation and Development to answer a deceptively difficult question: What, exactly, is a city?

Difficult, because no two countries answer it the same way. In Denmark, 200 people living near each other constitutes a city. In Japan, the threshold is 50,000. Far from allowing an apples to apples comparison, those differing thresholds mean that putting Danish cities and Japanese cities side by side would be more like a blueberries to watermelons comparison.

As a result, says Lewis Dijkstra, the European Commission’s lead researcher on the project, “We’ve never known how many cities there are.”

Indeed, that countries around the world have such wildly divergent definitions of “city” has long flummoxed demographers, urban planners, and development specialists. In settling the debate once and for all, the new definition’s results upend many accepted truths about the state of the world’s cities.

For starters, the claim that the world became majority urban in 2007 for the first time in human history? Not true.

According to the new definition, which defines a city as a contiguous geographic area with at least 50,000 inhabitants at an average population density of 1,500 people per square kilometer, about 48 percent of humanity lived in cities as of 2015. (This definition roughly corresponds to the “metropolitan statistical area” used in the U.S. Census.)

Why the sudden decrease? Because over a quarter of the planet lives in towns — like those Danish hamlets of 200-odd souls — a category that the world has largely ignored in its preference for an urban-rural binary, the idea that someone either lives in a city or in the countryside.

“Towns are misunderstood orphans that were lost in translation,” says Dijkstra. While “town” versus “city” is a clearly understood distinction in English, he says that Dutch, French, German, and Spanish all lack an equivalent term.

But in defining this third category, Dijkstra argues, we have a more accurate understanding of what the world really looks like — a gradient between rural farmers and city dwellers. Those towns, moreover, are the cities of the future.

This more accurate picture matters because simple stats like a majority-urban planet justify the allocation of enormous sums of foreign aid and domestic spending. For example, the 2015 announcement of the German government’s €100 million fund for climate-friendly urban infrastructure leads with that claim. In Egypt, places listed as rural agricultural settlements on official maps are actually cities as large as 275,000, but making the official change puts the government on the hook for everything from schools to courthouses.

Among the other findings that caught this small army of PhDs in urbanization by surprise? “We had no idea that roughly 20 percent of cities in the world are shrinking,” says the OECD’s head of urban statistics, Rudiger Ahrend. “It’s getting more common in countries where the population has started to stagnate or decline.”

These tidbits are just a few of the potential outcomes for this new global definition of cities. Countries already submit statistics about their cities annually as part of their progress reports toward the UN’s Sustainable Development Goals. These goals include indicators like air quality and access to public transport that, until now, were susceptible to fudging the numbers.

“When you play around with the boundaries, you can make your city look good,” says Robert Ndugwa, head of the UN’s Global Urban Observatory. For example, expanding city boundaries can average out poor air quality by incorporating fresh air from the outskirts. By contrast, shrinking city boundaries makes data on public transport access look better by not counting far-flung neighborhoods cut off from the bus or subway system.

Such shenanigans will hopefully come to an end next month when the UN’s Statistical Commission decides whether to adopt this new definition as the global standard. If so, it will bring urbanization in line with other commonly studied issues.

“30 years ago, every country in the world was discussing poverty using only national definitions,” says the World Bank’s Ellen Hamilton. “It was impossible to compare poverty across the globe.”

In 1990, the World Bank introduced the living-on-one-dollar-per-day poverty threshold and changed the conversation on poverty into an easily understood issue, whether someone was struggling on the streets of London or in the rice paddies of Laos. (Today, the figure stands at $1.90 per day.)

For some urban planners taking in the new definition for the first time, the implications were stark. “In Nigeria, a city is any place with 2,000 people or more,” says Patrick Nyam at the Nigerian Institute of Town Planners. “The infrastructure that you provide for an urban area of 2,000 would probably be the same you provide for one of 1,000,000-plus.” A good deal for the small town, a raw deal for the booming city.

As for moving the needle up to 50,000? “This is a very good idea, but they are very slow at adopting changes in Nigeria,” he says.

Our special correspondent Gregory Scruggs will be in Abu Dhabi to cover World Urban Forum 10, taking place February 8 through 13, 2020. To stay on top of the essential conversations and innovative solutions presented at WUF 10, sign up for Urban Planet, our global sustainability newsletter.

Gregory Scruggs is a Seattle-based independent journalist who writes about solutions for cities. He has covered major international forums on urbanization, climate change, and sustainable development where he has interviewed dozens of mayors and high-ranking officials in order to tell powerful stories about humanity’s urban future. He has reported at street level from more than two dozen countries on solutions to hot-button issues facing cities, from housing to transportation to civic engagement to social equity. In 2017, he won a United Nations Correspondents Association award for his coverage of global urbanization and the UN’s Habitat III summit on the future of cities. He is a member of the American Institute of Certified Planners.