Gauging the quality of life in Austin, Texas. 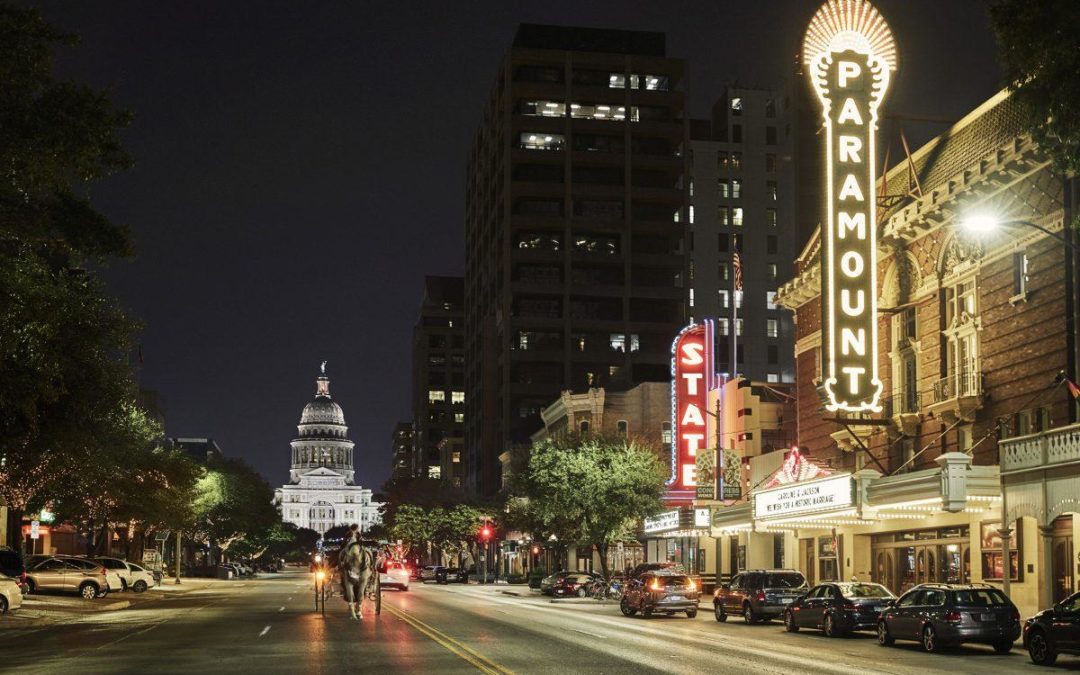 ↑   A view of downtown Austin, Texas, which has been named the top place to live in America.

Interesting story here about a growing city by the impetus of booming tech & start-up businesses.

Is Austin, Texas, The Best City In America?

What is it about Austin, Texas? This southern city keeps making headlines. Austin was recently voted the No. 1 place to live in America for the third year in a row — based on affordability, job prospects and quality of life. It was named the fastest growing large city in the U.S. It ranked No. 4 of the best large cities to start a business. It was chosen among the top 15 cities in the United States to visit. And its home state of Texas took the top spot in a study of the best states for female entrepreneurs.

It’s no secret that Austin, Texas is a hotbed for technology, startups and innovation. There are so many tech companies that Austin has been nicknamed “Silicon Hills.” Apple recently announced that it is creating a $1 billion campus with the capacity for 15,000 employees, making it the largest private employer in Austin. A hiring surge from Facebook is turning Austin into the third-largest U.S. hub outside of the company’s Silicon Valley headquarters. And in the past couple of years, Google and Oracle have opened offices downtown.

Why Austin? For one thing: “Everything is bigger in Texas,” Texas Governor Greg Abbott said at a press conference in December. Austin has also long been the tech center of Texas, with 6,500 startups and tech companies based here, including Dell — which was founded in 1984 by Michael Dell while he was at the University of Texas and helped kick off the city’s technology boom. This is also the home of South by Southwest (SXSW), which has transformed from an indie music gathering into one of the world’s most trendsetting technology festivals.

A huge part of the appeal: Austin is one of the most significant cities in the country for entrepreneurship and a recognized hub for startups. “Austin attracts annually about a billion dollars in venture capital investment and another billion dollars in corporate entity investments,” says Angelos G. Angelou, who used to be the vice president for economic development for the Austin Chamber of Commerce, as well as its chief economist. He’s now CEO of AngelouEconomics, a technology consulting firm that advises cities trying to attract investment, as well as companies looking for new locations.

Laura Lorek is the publisher and cofounder of Silicon Hills News, which covers technology in the area. When she launched the site in 2011, she says she covered just about every startup in town. “The growth in startups and startups culture has been incredible,” says Lorek. “Now, there are so many, I don’t know them all.”

William Hurley, a.k.a. “whurley,” is a highly recognized Austin-based entrepreneur who is now on his third startup, Strangeworks, which is using quantum physics to reinvent computing. His previous company, Honest Dollar — a retirement platform — was bought by Goldman Sachs in 2016; before that, he sold Chaotic Moon, a creative studio, to Accenture. Hurley has lived in Austin for almost 25 years. “Austin is an amazing city for entrepreneurs,” says Hurley. “There are tons of founders and a community of startups to lean on when you’re just getting started.”

Playing games on the lawn of the Four Seasons Hotel Austin.

Another draw, says Lorek: “Austin is a special place with an appealing culture. It has a lot of great parks, river access, hike and bike trails, good food, great music and it has a collaborative tech culture that is warm and accepting of people who are not from here.”

Austin also has a highly educated workforce, thanks in part to the University of Texas and other local universities. “We have an incredible talent pool here from a number of universities, and many of those students are inclined to look for employment here,” says Angelou.

Austin’s low cost of living adds to its appeal. There’s no personal income tax, and the city has more affordable housing than on the coasts, from which it pulls a lot of its transplants. According to the Economic Policy Institute’s family budget calculator, which factors in expenses like housing, food, transportation, and health care it costs about $3,197 per month for a single adult to live in Austin, while San Francisco — the most expensive city in the U.S. — costs $5,756 per month.

“Housing options can cost [thousands] a month more in California than a comparable option in Austin, so moving employees here can effectively give them a pay-raise without raising their salary,” says Hurley.

Ben Rubenstein, who cofounded the online marketing company, Yodle, when he was in college and sold it to Web.com for $342 million in 2016, is another successful Austin-based founder. He had been based in New York City until around 2011, when Yodle acquired an Austin-based SEO company called Profit Fuel. After commuting back and forth, he decided to relocate to Austin full-time. “I not only fell in love with the city, but I knew it was a great place to scale a business,” Rubenstein says. “When I started [Opcity] in 2015, I knew there was no better place to start a tech company.”

After selling the real-estate technology platform Opcity to News Corp. for $210 million, Rubenstein is staying on as CEO and plans to remain in Austin. “It’s a cool urban environment. It’s also an active community. The weather is much better,” says Rubenstein. “Lots of smart people are moving here.”

Another Austin-based tech brand that has made it big is Bumble, the dating app that has grown to over 55 million users in just four years. “Austin is where it all started for us, and being surrounded by such a supportive community as our brand has grown has meant the world to us,” says Bumble’s Chief Brand Officer Alexandra Williamson. “It’s been exciting to watch the tech industry in Austin grow and flourish, and I think we will only continue to see more opportunities for tech workers in the city of Austin and the surrounding areas in the future — from more entry-level opportunities for recent graduates to more high-profile executive positions in the area, as well.”

Experts anticipate that all of this expansion and development will have a massive impact on the growing metropolitan area, which already has a population of over 2.1 million. “I remember when I first moved to Austin in 1984, it was only about 560,000 people,” says Angelou. “We’re projected to exceed 4 million people by 2040.

A bartender at the Four Seasons Hotel Austin.

Hotel industry execs say it will have a positive impact on tourism, as well. “Any time a major company establishes a new presence or expands their existing footprint in Austin, we see an uptick in corporate travel,” says Rich McGonnigal, director of sales and marketing at Four Seasons Hotel Austin. Located on the shores of Lady Bird Lake, the hotel is emblematic of the new Austin, offering clever only-in-Austin experiences like a summer “champong” service (think champagne and ping-pong), ceviche classes and an on-demand Margarita Cart that can be delivered to you for some in-room mixology.

Joe Pagone, general manager of the three-year-old Hotel Van Zandt, says his music-themed boutique property has witnessed occupancy growth aligned with Austin’s boom. “People are more interested in Austin than ever, and these companies are helping put the city on the map,” Pagone says. “People are seeing that it’s a great place to live, but also a great place to travel. It’s increasing occupancies and increasing revenues and increasing travel into the market.”

The rooftop pool and fireplace at the Hotel Van Zandt.

And there are more hotels coming to respond to the increased demand, including the new East Austin Hotel, a modernist property that features collaborations with local artisans and makers. Lufthansa also recently announced new non-stop service between Austin and the airline’s Frankfurt hub.

But not everyone is happy about all the development. “Austin’s community has a love and hate relationship with growth and change,” says Lorek of Silicon Hills News. “Everyone loves the Austin they moved to or grew up in. The city has changed so dramatically during the past ten years and the result of rising real estate prices downtown has driven many long-time businesses out of business.”

Members of SXSW in front of a mural on 6th street.    GETTY

Opcity’s Rubenstein points out that traffic is also an issue: Austin ranked as the 14th most congested city in the nation. “Austin doesn’t have good public transportation, and the roads were not designed for this many people,” he says.

Lorek says that Austin city leaders are grappling with affordability and traffic problems to accommodate the influx of people. “The creative community of writers, musicians, artists and all of the weird funky stuff that made Austin great must remain for Austin to continue to be a highly desirable place to live,” she says.

Nevertheless, the future looks bright. “It’s viral marketing that takes place in Austin. People are so enthusiastic about the quality of life and what the city offers,” says Angelou. “I don’t foresee a downside.”