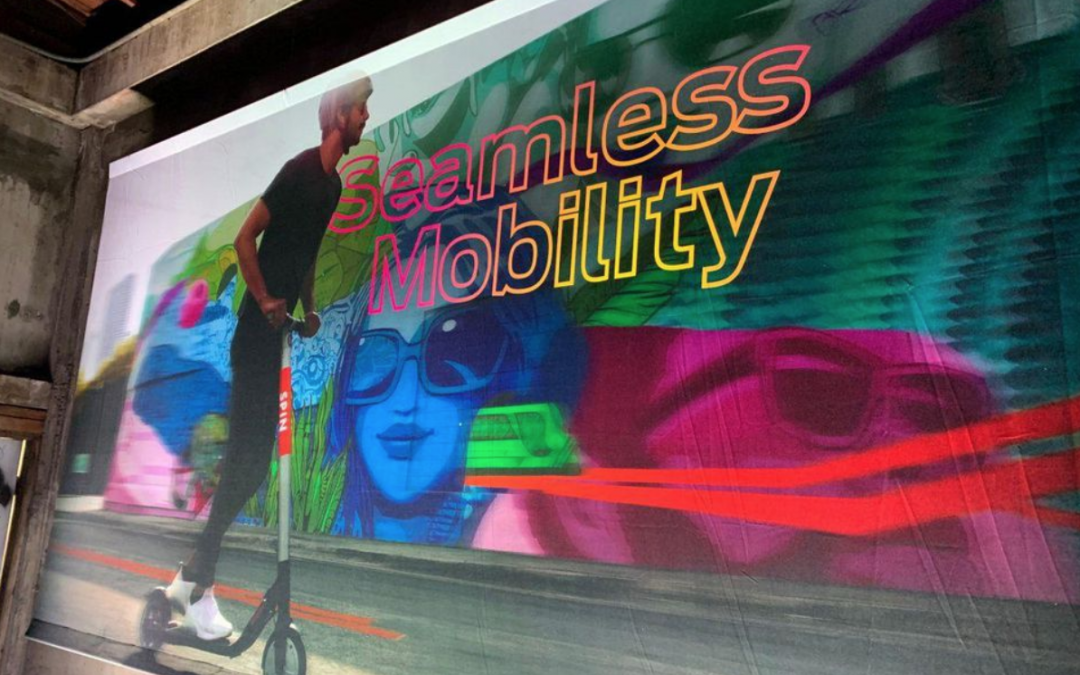 ↑     The evolution of mobility is only beginning.   GABE KLEIN

Very good unpacking here of the issues in and around Mobility data protection. And a good argument in favour of re-calibrating trust in relation to government stewardship of personal data from mobility uses.

Climate change on-one hand … and data sharing, security and privacy on the other, may seem like problems that exist in distant worlds from each other, but let’s take a harder look. They are both existential threats to our way of life; physical destruction of our ecosystem, or cloud-based destabilization of our political system and polarization of populations (just to start).  In the world of transportation, small, electric vehicles could be a lifeline to lower CO2 emissions in our densest urban places, but data protocols and associated misunderstandings threaten to derail the scaling of these crucial solutions that would provide people with lower cost, sustainable transportation solutions from private sector companies, into publicly run cities.

Today, the U.S. Conference of Mayors will pass a resolution “Supporting the Development and Adoption of an Open Source, Mobility-Focused Platform for Management of Cities’ Public Right-of-Way,” or The Open Mobility Foundation and the Mobility Data Specification.

How did we get here?

When Google introduced Gmail 15 years ago, on April 1st, 2004, they started a data revolution; beta-testing and quickly proving that people would gladly trade access to their most personal information in exchange for very high quality, and free services. I am not judging btw, this was a brilliant bet and has changed the workplace in innumerable ways, spawning dozens of new verticals including social media and thousands of start-up businesses with free-to-consumer, ad-based and data monetization revenue streams, from Facebook to Waze.  What was not contemplated was the Pandora’s box of geolocational data + first-party and third-party data targeting, and in-app monetization (what apps in 2004??), the resulting data privacy issues, surreptitious breaches and uses of 3rd party data including the 2016 election fiasco… that would slowly take hold over the next two decades.

In 2019, we seem to take for granted that data produced by citizens, but on a private platform, is then “owned” by the company that grants access to the citizen and provides them a service.  In the simplest of terms, in a moment of extreme, and wonderful innovation, Silicon Valley assumed ownership of a powerful asset. I don’t fault them for this, particularly when you are pioneering change in soon-to-be very competitive industries, and no one is really paying attention. It’s much like finding a new island and planting a flag and claiming ownership as countries did in days past. Having recognized that, and all of the unintended consequences in the last few years, it is now time for a new approach to “data stewardship” vs. “ownership, and as the EU’s GDPR shows, the time has come and industry, local and national governments and NGOs recognize this too.

The Mobility Opportunity and Challenge at Local Government’s Door

2018 was the “year of the scooter” for mobility enthusiasts, as the latest transportation craze took hold and a net-positive one at that… millions of trips that could have been taken by car, ridehail (car) or other means, were taken by small, electric, 2-wheeled scooters or bicycles. Like Uber /Lyft and 1st-gen dockless bikes before them, many of the companies dumped copious amounts of product on the streets to test the waters and see how local jurisdictions would react. Unlike Uber/Lyft, the companies owned the asset and could not utilize the personal ownership model to provide obfuscation of ownership in an unmarked vehicle… and cities quickly realized that the ridehail model was an anomaly, not the norm. If these “micro-mobility” companies wanted to operate in public space, they would have to work with local government, and this is a good thing if we want a long-term sustainable business and transportation option for citizens.

The public-private balance of power is a very important piece of maintaining good relations between the government and private sides, as well as maintaining a relentless focus on the public’s/customers interest. People I like and respect have made the argument to me in multiple forums  that “local government does not have the bandwidth or resources to manage complex data vs. the private sector.” To which I respond in a few ways:

In June of 2018, the Los Angeles Department of Transportation released its Mobility Data Specification (MDS) API standard (application programming interface) between shared scooter or e-bike providers and the city, with the purpose of standardizing basic data exchange regarding vehicle starting point, end point, and trip route in 100 foot increments. Our firm, Cityfi had the opportunity to work with the city, interface with the private firms and see behind the scenes as to how this was rolling out and being received, and it was fascinating.

Pretty universally, and because the LA had also released a “Strategic Implementation Plan,” initially focused on autonomous vehicles that referenced a future state that could include some level of “routing” and “control” over the transportation system exerted by government (as is done today in analog fashion), there was a fair amount of palpable fear and uncertainty on the part of the private sector, particularly the service providers and their representatives in the data privacy world.  Some of this is legitimate, I mean, how often does local government stand up and assume a posture that we will ‘take control of the system’ for the societal good? Ironically, the language that had been used was cribbed directly from the 1980’s ATSAC traffic signal system in LA, (Automated Traffic Surveillance and Control (ATSAC) System) which was instituted to do just that btw, but added a “big brother” vibe to the storyline in 2019.  Data privacy concerns were suddenly being bandied about Twitter and other venues with grave concerns being expressed by companies and privacy advocacy groups about the potential to re-identify individuals by triangulating personally identifiable information, also based on cities voluntarily publishing detailed individual trip data (which cities should not).  In the meantime, 75+ cities and countless mobility providers embraced and adopted MDS as a standard for data exchange facilitating information to turn into scale of service.

My feeling then, and my feeling now, is that this is obfuscating what’s really important.  First, a trove of primary data is generated by citizens and fed into a private companies database.  A small derivative data feed relating to vehicle origin and destination is being requested by cities for the purposes of managing the system, regulating safe operation for citizens, and enforcing adherence to regulations prescribed by local legislators on equity of access and geographic limitations and caps.

If this is some terrible breach of a citizens privacy, why is the generation /origination of this data in the private sector, and limitless monetization and sharing with other private companies… just fine? A recent Washington Post piece found that in one week, an iPhone had over 5400 “app trackers “ guzzling data including the user’s real-time location. And this from Apple, a woke company that proclaims responsible data sharing and privacy to be job #1.

The Real Deal (In My View)

So let me try to break this down to its simplest form and separate the hype & fear from the reality:

What is the solution?

The public and private sectors are merely stewards of individuals data and need to take to heart that they are both there to work for citizens and the greater good of society while taking note that local government is the most accountable and trusted by citizens in this equation. The Open Mobility Foundation, with a big tent for many other organizations and entities, is the beginning of a public-private solution; an international coalition of cities, governed by cities, and partnered with the private sector can assure standardization of data practices that help private sector providers to scale faster, bringing economically and environmentally sustainable transport solutions to people. But I am also here and now calling for an end to the pretense that there is some Beijing style authoritarian plan on the part of city governments that want detailed trip information from shared mobility operators to manage the transportation system in the 21st century.  We know that data collection at its origination is where data protocols are most impactful. It is misleading, inflammatory and threatens to stifle innovation from startups and cities alike to claim that local government’s meager data requests pose a threat. More importantly, this approach continues the pattern of leaving fossil fuel companies as the biggest winners, a classic distraction technique while the planetary ecosystem falls apart. Public and private entrepreneurs know that we can do better.